The alternator on your Chevy Cobalt can be found on the passenger side of your engine, toward the front. To change it out, you’ll need some basic hand tools and minimal mechanic skills. Doing an alternator replacement at home can save you tons of cash, so here’s how it’s done. 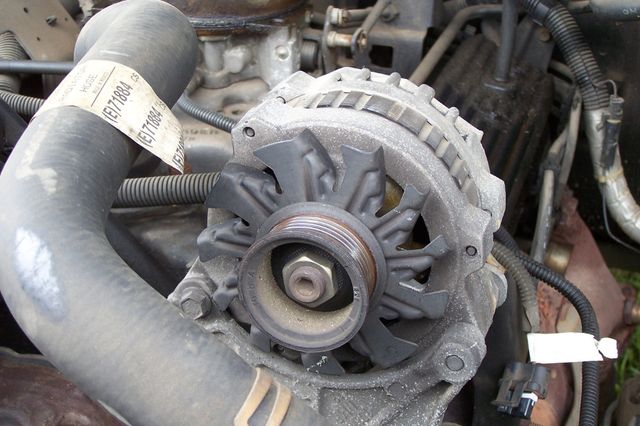 When you get inside the engine bay to remove the old alternator, start by loosening the clamp that holds the air intake tube to the filter housing and engine. Do this using a Philips head screwdriver — remove the air filter housing next. Then, disconnect the wiring harness from the vehicle’s MAF sensor.

Find the square hold in the belt tensioner arm and put the 3/8” ratchet in the hold. Turn the tensioner counterclockwise and remove the serpentine belt from the pulleys — then release the tensioner.

Disconnect the wiring harness at the alternator. Remove the terminal nut and battery cable from the vehicle’s alternator. Now you can remove the three alternator bolts holding it in place and take it out by hand.

Holding the new alternator in position, install the three mounting bolts and tighten them to spec. You’ll need to consult a service manual for torque specs. Install the battery cable and terminal nut and tighten to torque spec. You can now plug the wiring harness back in.

Rotate the tensioner pulley with the ratchet and replace the belt onto the pulleys. A diagram in your engine bay will show you how it needs to go back on if you’ve forgotten.

Reinstall the air filter housing and tighten the retaining bolts to spec. Put the air tube back on and tighten the clamp. Plug the wiring harness back into the MAF, reconnect the battery, and you’re done! You’ve now changed your own Chevy Cobalt alternator.