When it comes to buying parts to fix your GM vehicle, you have two options: you can buy a genuine OEM part (just like the part you're replacing), or you can buy an after-market part and hope for the best.

While it's true that genuine factory parts tend to be more costly than after-market parts, there are three very good reasons for that higher cost:

While there are some after-market parts that offer OEM levels of quality, these parts are rarely “cheap,” and they usually don't offer the same fitment. In almost all cases, you should replace a broken OEM part with another OEM part. Here's more detail on the “why.” 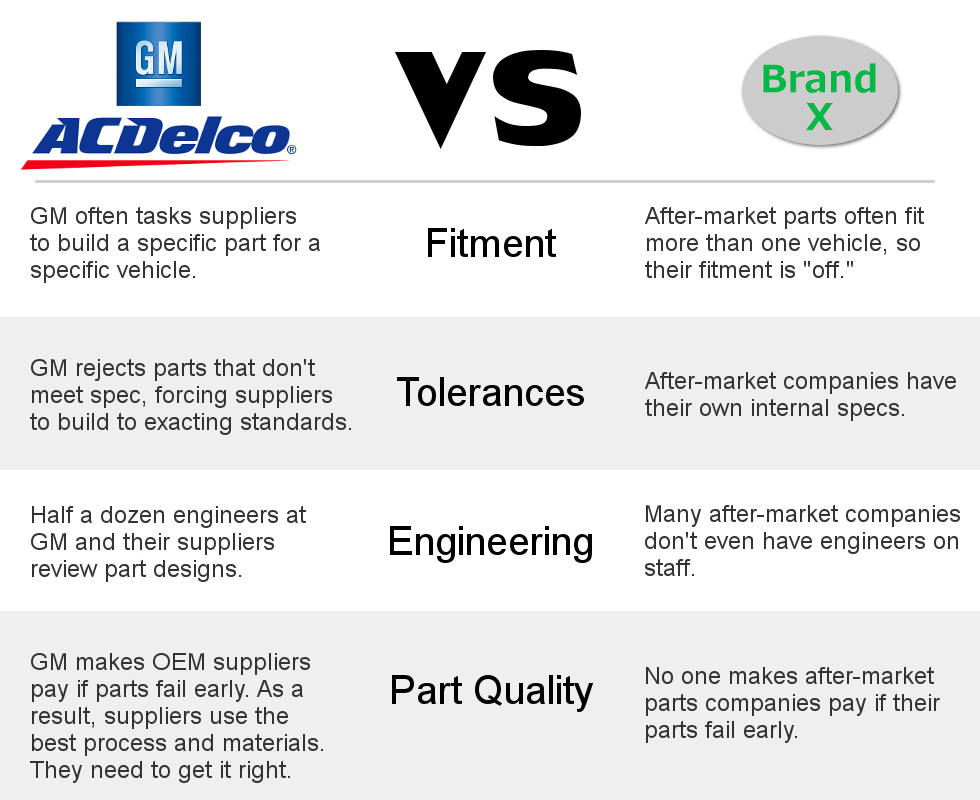 The Close Tolerances of OEM Parts

To understand why OEM parts are generally better than after-market parts, you have to understand how parts are manufactured. When Chevrolet designed the new Corvette, for example, they worked with a long list of parts suppliers to spec-out and source each and every part in the vehicle.

Many of these parts were designed specifically for the Corvette. While it's expensive to design parts for a specific application, it ensures that the part does exactly what the design requires. This is because “generic” parts that aren't application-specific often can't stand up to the needs of the vehicle.

After-market parts, on the other hand, are often designed for multiple applications on different vehicles. This is simply about cost – most after-market companies won't design a different alternator specifically for the Corvette because they know a generic design will be “good enough” in the minds of many vehicle owners. However, because most after-market parts aren't designed for a specific application, they don't function as well and don't fit as nicely.

Brake rotors are a great example: OEM brake rotors are a specific width and thickness for a specific vehicle. But because rotors are often roughly interchangeable from one vehicle to the next (meaning that you can make a rotor fit on a lot of different vehicles), after-market brake rotors are rarely made to exact OEM specs. A slight difference in specs can lead to decreased brake performance, faster pad wear, extra brake dust, and so on.

Build It Nice or Build It Twice

As a result, OEM part manufacturers tend to use the best materials they can, set high standards for quality, etc., as it's cheaper to build the best part possible the first time than it is to pay the automaker for warranty claims every time one of their parts breaks.

After market parts manufacturers, on the other hand, aren't really held responsible by anyone if they sell a part that fails in 7 months. So, they can afford cut corners here and there, and at least some of them do.

Whatever vehicle it is we're talking about, whatever part we're talking about, no less than half a dozen engineers have studied that part if it's OEM. That's because the vehicle manufacturer has hundreds of engineers responsible for ensuring each and every part is safe, reliable, and low cost. Automakers spend lots of money on engineering because experience has shown that good engineering is essential to manufacturing high quality vehicles.

But it's not just the automaker's engineers that look at each and every OEM part. Each OEM part manufacturer/supplier has their own engineering teams looking at every part before they build. The reason? As mentioned above, the supplier is financially responsible for warranty claims on their parts. You can bet that OEM part manufacturers are going to check and double check the part design.

But What About Company X?

Many people swear by parts made by “Brand X,” and while OEM parts are generally better than after-market, there are some times when the after-market has a better part available.

But it's critical to understand that cheap auto parts aren't good auto parts. Engineering and manufacturing a quality part to a high tolerance is expensive. It's hard to believe that the companies selling cheap after-market parts are spending the kind of money necessary to design and manufacture great parts.

Don't Be Tempted By The False Economy of Cheap Parts

The initial cost for an aftermarket part is generally cheaper, but when you step back and consider that:

If you save $50 installing a cheap alternator, but then have to re-do the repair 8 months later, you lose hours of your time and you can't drive your vehicle on two separate occasions. It's hard to spot the “savings” in this scenario.

But when it comes right down to it, the best advice is to replace OEM parts with other OEM parts. If you're trying to save money, you can see about buying a re-manufactured OEM part instead (which we offer). Re-manufactured parts are less costly, but they're still made to OEM spec with quality materials.